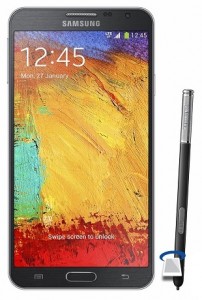 Things are heating up ahead of the big Samsung reveal and now here’s some unofficial press renders of the alleged Samsung Galaxy Note 3 Neo, which is expected to be a trimmed down version of Samsung’s flagship phablet, the Galaxy Note 3.

The good folks at SamMobile received a tip from someone working at a Belgian retailer. According to this anonymous tipster, the new Samsung handset’s product page is live, although not yet viewable by the general public.

The Galaxy Note 3 Neo is apparently set to cost €599 when it launches. Thanks to this generous insider you also get these press snaps for your viewing pleasure.

Unremarkably the Note 3 Neo looks very similar to the Galaxy Note 3 in almost every way, except that the Neo is equipped with a smaller screen. Based on rumours, the handset’s 5.5-inch display will have a resolution of 720p.

Other noteworthy (see what I did there?) specs include 2GB of RAM, 16GB of storage with a microSD card slot, 8MP rear camera, 1.9MP front-facing camera, WiFi, Bluetooth 4.0, 3,100 mAh battery, S Pen features, Galaxy Gear compatibility and all of this will be running on Android 4.3 Jelly Bean.