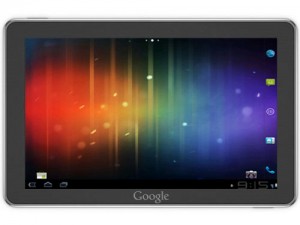 Lots of people are digging the Samsung Galaxy Nexus mobile phone – even with its volume teething problems. You may be interested to hear that Google are now pushing for a top-flight tablet. Galaxy Nexus Tab anyone?

The rumour mill has started up around the possibility of a Samsung Nexus tablet landing in the next 6 months after Google’s executive chairman, Eric Schmidt, mentioned that the Big G is aiming to release a tablet of the highest quality in to the market by summer 2012.

Schmidt was being interviewed by an Italian newspaper stating that Google wants to release a Google-branded tablet very soon and, I have to agree with this lot (they even made the concept renders you see here), if I was Eric I’d be approaching Sammy for the task in hand.

Samsung’s phones have successfully nudged the iPhone 4S off many chart top-spots and, even though the Galaxy Nexus phone didn’t enjoy a fault-free release, the mobile itself is very tidy.

I reckon that a quad-core packing tablet running on Ice Cream Sandwich would be sweet in all manner of ways, wouldn’t it?

Would you buy a Samsung Galaxy Nexus Tablet? Let me know below on on Facebook 🙂