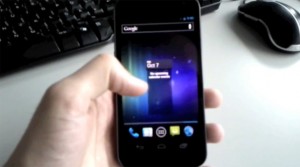 The Samsung Nexus Prime has gone and broke cover seeing as though its official outing has been delayed. The Nexus certainly looks as though it’s going to be quite the smartphone.

As I mentioned earlier today along with leaked snaps of Google’s latest operating system, Ice Cream Sandwich, the official release of the new Samsung Nexus and Android 4.0 has been cancelled for now in respect of the late, great iSteve.

That doesn’t mean that these products are being camera shy. You’ve seen screenshots of ICS and now here’s a specs leak and the Samsung Nexus Prime — now named the Samsung Galaxy Nexus — performing for the camera!

So – what about those specs then? Well, how does a 1.2GHz dual-core A9 processor partnered with 1GB of RAM suit you?

Add to that 32GB of internal storage and a 5-megapixel snapper capable of shooting 1080p video on the back with a 1.3 unit on the front.

The Galaxy Nexus can support LTE or HSPA to suit the carrier and is equipped with NFC.

All of that is squeezed into a body no more than 9mm thick!

It sounds as though the Samsung Galaxy Nexus will live in the US as there’s no word of UK releases just yet. Would you pick the Sammy Galaxy Nexus over the iPhone 4S?