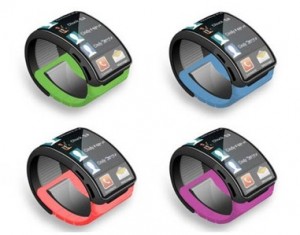 More information has landed regarding the Samsung Galaxy Gear smartwatch ahead of its rumoured unveiling on September 4th.

The  wrist-bound device will apparently be available in a total of five different colours, with four being available right at launch.

According to Sammobile, Samsung will launch the Samsung Galaxy Gear in white, orange, grey, and black with a further version following later in white gold.

The white gold version of the Samsung Galaxy Gear will apparently be exclusive to certain carriers or regions, and Samsung may introduce more colours of the device at a later date.

So far, the specs of the Samsung Galaxy Gear include a 1.67 -inch touchscreen display with a resolution of 320 x 320 pixels.

It’s thought that under the Gear’s hood will be found a dual core 1.5GHz processor and 1GB of RAM, the device is also expected to feature a 2 megapixel camera.

It will come packing Google’s Android OS, and will be used in conjunction with Samsung’s Galaxy range of smartphones to perform a number of tasks like email, messages, answer calls and may even be able to be used for video calls.