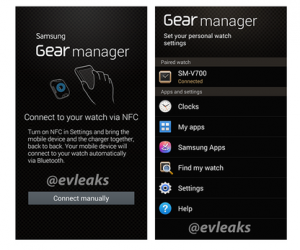 News has just broke that the Samsung Galaxy Gear smartwatch will be heavily reliant on your phone to do anything.

A Twitter post by Ev_Leaks has shown a couple of screenshots that sneaks a peek at the setup app for the Samsung Galaxy Gear, which is all set to be made official on September 4th.

If these Gear Manager snaps turn out to be above board which, with Ev_Leaks’ past record for being on the button with leaky details, they probably are, the smartwatch will likely rely heavily on your phone do anything.

These shots confirm that the Galaxy Gear will come with NFC (Near Field Communication) and Bluetooth, which the smartwatch will use for easy pairing with your phone or tablet.

Once paired, it looks as though the hooked-up mobile phone will be then used to configure pretty much everything that the watch will be doing. Anything from setting the display time to tinkering with whatever apps the smartwatch supports.

All of this points to the watch being more a convenient way to access information on your smartphone, above anything else.

Even with the limited screen real estate on any smartwatch, I would’ve preferred to see something a bit more from Samsung.

It is good, however, to spy apps such as ‘Find My Watch’ which would seem to indicate that, at the very least it’ll have GPS. It also means that Sammy is expecting you to misplace this wearable tech at some point…