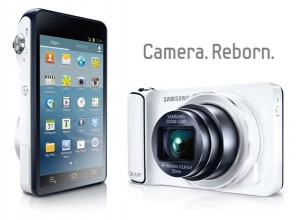 UK tech retailer Clove has just put the Samsung Galaxy Camera up for pre-order with a price tag of £399 including taxes.

Under the bonnet of the Samsung Galaxy Camera lies a quad core 1.4GHZ processor and 8GB of built-in storage.

You get a 16 megapixel sensor and a 4.8 inch touchscreen display, plus a pop up Xenon Flash and 21x optical zoom which should make you a happy snapper.

You can increase the space thanks to a microSD card slot and 50GB of free Dropbox storage for two years, it also comes with a HDMI port and a microUSB port.

Thanks to Wi-Fi and 3G connectivity your photographic works of art can be squirted to your favourite social sharing site straight from the Galaxy Camera.

So, you can pre-order right now – I’m still waiting to hear of an official release date though.