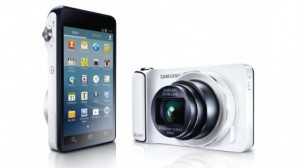 On Tuesday there were rumours that Samsung might release a digital camera as part of their Galaxy range but you know rumours. But it seems that it’s true as Samsung have gone official with it at IFA Berlin.

Samsung’s President of IT and Mobile Communications Division, JK Shin, proudly announced: “The camera is reborn.”

The new smartphone/camera hybrid was announced at IFA in Berlin and is pretty much how you’d imagine such as device.

It’s basically a compact camera with a smartphone-type touchscreen on the back and it is equipped with Google’s Android operating system.

The Galaxy Camera is designed to take excellent quality snaps as well as allowing you to join in with instant sharing and web browsing options thanks to the joys of wireless network connectivity.

Sounds like a decent enough camera – but then there’s the fact that it’s also packing a 1.4 GHz quad-core processor running on Android 4.1 (Jelly Bean). This is where it’s Wi-Fi, 3G or 4G connectivity skills come in to play.

Neat functions such as instant photo sharing and “Auto Cloud Backup” come to the fore thanks to its cross-breeding.

A “sharing widget” is also included for one click sharing to multiple social media streams without need of individual apps.

As well as hooking up via 3G and Wi-Fi version or 4G and Wi-Fi, depending on the version, you can also connect wirelessly to its smartphone and tablet brethren in Samsung’s Galaxy family.

Nice touches like the being able to control the zoom via talking to it, 10 “smart pro” modes for capturing different scenarios such as moving water and light trails, on-board editing (including video editing) and content management solutions such as face tagging, photo search by time and/or location, and “remote viewfinder” linking to a separate smartphone will no doubt make this one of the most gadgety cameras out there.