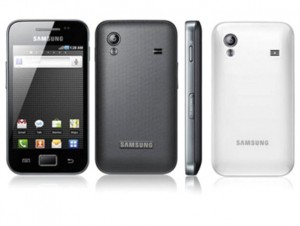 If you’ve been eyeing up the Samsung Galaxy S II for your kids (or your parents for that matter) and think that it might be a bit too much phone for them – or if you like the sound of the S II but you’d rather have half of one – You need to get the Samsung Galaxy Ace!

The Samsung Galaxy Ace is a restrained, classic beauty and features a 3.5-inch screen set into a body with a smooth front and a tactile rear. You even get a smooth white case back in the box if you’d rather sport that. The Galaxy Ace looks a little like the iPhone 4, if you squint, but where there’s metal on the Apple phone you’ll find mostly plastic on the Ace – but that does make it lighter.

The Ace does not feel cheap but weighing in at only 113g you’d hardly feel it in your pocket.

The 320×480 LCD screen is quick and responsive but that resolution may be a bit of a disappointment when compared with other, admittedly more expensive, mobiles out there. You may find yourself having to zoom in on small text on websites more often than on other phones but, thankfully, the multi-touch on the Ace is… well… ace! 🙂

The bonus of a slightly smaller screen is that the Galaxy Ace just sips at the battery. I’ve used the Ace over a weekend with GPS and Wi-Fi activated and it stayed with me, without a charge top-up for almost the entire time. Try getting two days out of your iPhone 😉

The Ace is powered by an 800MHz ARM processor running Google’s Android 2.2 Froyo. It is equipped with 158MB internal memory and comes with a 2GB microSD card but you can slip in one of your own with up to 32GB of space. As expected from smartphones these days the Galaxy Ace is packing an accelerometer and A-GPS.

Another thing that the Ace has in common with the iPhone is that it has a great browser that also does not support Flash – don’t worry though. There is a YouTube app so you can still watch arguments on buses and cats being cute.

The lack of Flash is off-set by the fact that the Galaxy Ace works as a 3G Wi-Fi hotspot the one I’m testing was on Three‘s network which has All You Can Eat Data options which would be handy. Roam about the country with your laptop and your Ace will make the use of dongles a nonsense.

Being an Android phone the menus and icons are clear and you also get access to the Android Market. This means you can take your fill of Angry Birds as well as getting sociable with Facebook and Twitter. As well as Android Market Sammy has its own app store called Samsung Apps – I bet you probably guessed as much eh? Checking it out on the Ace the only a weather widget (which is pretty good), a news and stats app for Inter Milan (I-Inter) and Tek Trak which will help you locate your phone/tablet as well as giving you the option to remotely lock the device or wipe its memory – all of these are free downloads.

Other than adding handy shortcuts above the notification bar Google’s mobile OS is fairly untouched. What should get a most worthy mention is Samsung’s addition of the AllShare app. AllShare gives the Ace power to stream the media locked away on your phone up to DLNA-enabled TVs. That is rather special don’t you think?

Whilst you’re online you’ll notice that the Ace is very comfortable on the interwebs. Ignoring the lack of Flash everything appears smoothly and quickly thanks to its 7.2Mbps HSDPA connection and its support for 802.11n Wi-Fi.

I do like the little slidey door for the micro USB charging/synch’ing port – that’s a lot better than the flappy rubbery ones found on some other phones in my opinion.

It’s a little disappointing to find out that, even though Sammy has hardly fiddled with Andriod that much on this phone, you wont be able to benefit from Google’s over the air updates. To get your phone updates you will have to wait til you’re in front of your puter and connect the Ace up to it via the Samsung Kies synch’ing software – but then I have to do that with my iPhone and iTunes so……

The Ace looks similar to an iPhone and certainly feels better screwed together than many of its opposition. It has many features that more expensive mobiles have and Android hands it a load more benefits.

All-in-all the Samsung Galaxy Ace is a capable phone for not much money. If you were to get it from Three it’s free if you get it on The One Plan at £27 p/m on a 24 month contact with all the data you want, 5000 texts and 2000 any time, any network minutes chat.

The Ace is also available from T-Mobile, Orange and O2.