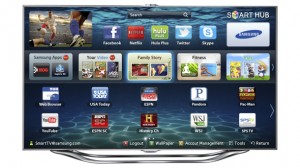 Have you been lusting over the Samsung ES8000 television? Slim, slender, shiny, smart and sexy are just a few of the ‘S’ words used to describe the clever gogglebox. It is now available in the UK as is the rest of Samsung’s 2012 LED and Plasma Smart TV series.

The Samsung ES8000 really looks at least as good in the flesh (or plasma) as it does in the variety of press pics.

I got up close with the Sammy Smart TV at Gadget Show Live and that ultra-thin 5mm bezel is just the start of the wow-factor.

As you can probably tell, this is no ordinary idot-box.

The ES800 brings face recognition as well as cutting-edge voice and motion control.

The ES8000 edge lit LED line ranges in size from 46- to 65-inches, and features Smart Interaction cameras and mics for videoconferencing as well as voice and gesture control

Joining its fellow Smart TVs it will come brimming with a host of apps including Twitter and Facebook. So, updating statuses and complaining about that dodgy penalty call can all be done without having to reach for your phone, laptop or tablet – I know what you like. 😉

The IR remote can take control of your other gear, such as your Sky box, which empowers you to talk to your tech and tell it what to do. We’ve all patiently awaited this day folks!

And, because your digits are free, you will be able to toy with the much lovelier touchpad remote.

This all sounds very cool but here comes the pain, my good and gadgety people.

Sammy’s latest and greatest hits a potent dent in any savings you may have accrued – Can your account handle you forking over £2,500 of your hard-earned for a new telly? If so, invite me around and I’ll bring snacks and beer!