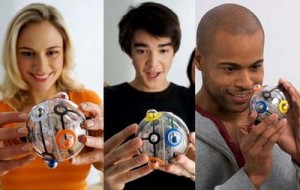 It has been confusing people over the last 30 years or so but as there’s cheats and iPhone apps to help those people still scratching their heads the house of Rubik have decided to release the Rubikâ€™s 360, a new puzzle sphere from the original inventor.

The aim of the Rubikâ€™s 360, invented by that master of perplexing puzzles, Dr Rubik, is to get six coloured balls trapped within several transparent spheres inside of each other into respective coloured pockets on the outside.

Although, this puzzle is different to the cube as it seems to rely more on dexiterity than problem solving logic.

Â “I feel that the Rubik’s 360 is one of the most innovative and exciting puzzles we’ve developed since the Cube – adopting elements of my original design, challenging the solver to use skill, dexterity and logic. But it’s a more kinetic challenge, more physical, because gravity is involved. We all have great hopes for it”.

I might even stand a chance with this one!

It’s due for release in the UK in the Summertime 🙂

Rubikâ€™s Cube Via The Telegraph