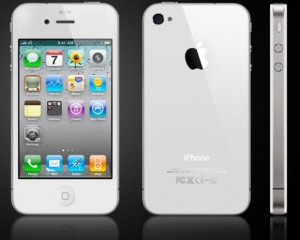 The moment some of you have been waiting for… the unicorn-like white iPhone 4 is now officially available in 28 countries, including the UK, across this globe of ours!

As Apple is still trying to clear up its location tracking stalking software that seems to save your whereabouts on your phone and computer it has now released the bridal white iPhone internationally today.

“The white iPhone 4 has finally arrived and it’s beautiful,” enthused Philip Schiller, Apple’s senior vice president of worldwide product marketing. “We appreciate everyone who has waited patiently while we’ve worked to get every detail right.”

Hmmm… ‘everything right’ would be to get the white colour to stay on the phone then as the albino mobile features the same 3.5-inch Retina display and ARM A4 processor as its darker-suited sibling. Getting everything right has taken the best part of a year by-the-way, but who’s counting? 😉

Here in the UK O2 and Three were the first to confirm availability of the ivory handset, which, funnily enough, is being sold on the same price plans as the black iPhone 4 on both networks.

On Three whiPhone is available for an initial cost of Â£229 on a Â£25 per month tariff on a 24-month contract. If you’re wanting to take advantage of Three’s The One Plan with its all you can eat data – fork out Â£69 up front for the handset and pay Â£35 per month for two years. If two years is a bit too much commitment then Three has the option of getting iPhone 4s on a pay as you go basis for a one-off payment of Â£499 – a Â£15 top-up will net you 300 minutes of voice calls, 3,000 texts and unlimited data.

Could the white iPhone 4 release be the reason for the rumours of the next gen iPhone being delayed?

Will you be pouncing on the iPhone that’s as white a Kate Middleton’s bridal frock or will you hang on for the iPhone 4S / iPhone 5?