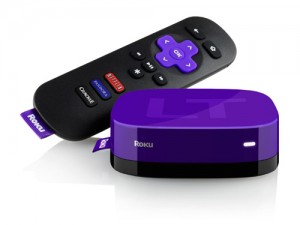 The budget set-top box from Roku has added the BBC iPlayer to its lineup of channels which is timely as the boxes have started shipping to the UK.

Roku’s supplying two models for the UK market. The stripped-back £50 Roku LT offers up 720p playback, while the £100 Roku 2 XS ups the ante with 1080p playback and a motion-controlled Bluetooth remote.

Roku having Beeb’s iPlayer is also a wortwhile addition especially when looking at the other 40+ channels.

Most of those ‘channels’ appear to be merely apps that give you access to a separate web service. That might well be enough for some.

The more useful ones are Netflix, Crackle and TuneIn as well as iPlayer – but then at this price that aint bad really.

The £50 LT model is capable of playing 720p HD video, and comes with Wi-Fi. The XS, however, is twice the price but can play movies at 1080p HD as well as packing Ethernet and USB ports, Bluetooth and you can expand the memory.

You can also play games on the XS, with the RF remote acting as a Wii-style motion control. It comes with Angry Birds to get you started with the bird flinging action as soon as you switch it on.

is available now from Amazon.