Robot Will Find Nemo and Take Nemo Away From Harm 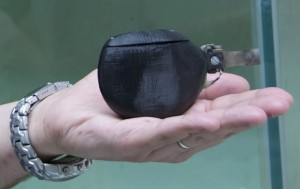 This may never had entered your thoughts but with the huge oil spillage and other man-made aquatic hazards Maurizio Porfiri wants to save fish.

Instead of startling our finned friends any more than we already do he has created a very special robo fish.

Ok, so it’s not much to look at and does appear to resemble something knocked up in a shed but this fishbot is designed to naturally control wildlife.

The findroid is equipped with an electroactive polymer locomotion system that’s designed to mimic the powerful motions of fish leaders – basically this fake fish can trick schools of real ones to follow it.

Eventually a robot like this will be sent to guide the lovely gilled ones away from turbines and such nastiness.

At the moment the robot can only swim in two dimensions and is battery powered. Porfiri’s team at NYU Poly is already working to get the bionic bass powered by waves.

Check out the robot in action below.