Robo-Exoskeleton Can Be Yours Soon! 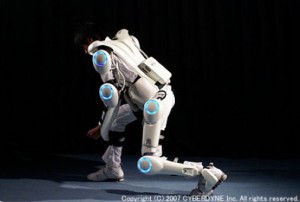 I thought that the Human Assistive Limb (HAL) would be years away from being released.

Ever destined to remain in a mad-scientists lab until the governement had equipped its armies with the things before being slowly opened-up to the general populous.

It sounds like HAL is going straight to the people that need it first!

HAL can equip its wearer a tenfold strength increase during specific actions.

This would undoubtedly change the lives of people with degenerative muscle diseases or accident victims.

The Human Assistive Limb has a five-hour battery life so, almost a working day, so it would be practical.

I’m guessing that those into more extreme pass-times, factory workers, builders and other heavy industry workers would get use from this – oh and rich kids.

Becoming bionic will cost around $4200 when these things start rolling off the line.

The first run, to be sold in Japan, has a limited edition of 400 units.

I’m hoping that the people with real need get these first and not some rich person wanting to act out Iron Man.

Check out the vid below 🙂