Robo Cop To Report For Duty In UK 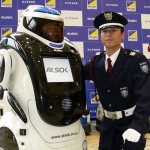 AI Professor, Noel Sharkey from Sheffield University (that’s in South Yorkshire folks!) has announced his findings after spending two months looking at trends and the evolution of robotics around the world.

At the centre of his predictions is the vast amounts of data that robots could store on-board and their ability to access databases containing all manner of information to almost instantly identify people.

In addition robots could go out armed with sensors to detect weapons, sniff out explosives and, with their super-human strength, make arrests.

He reckons that in aboutÂ 30 years time you’ll be seeing botsÂ loiteringÂ in strategic locations, monitoring crowds and using audio/visual systems be able to pick out drunks, fights and other anti-social behaviour and in the event of larger scale crowd problems fire RFID darts into the trouble makers and track them down later.

This really can’t come soon enough – although with the current politically correctness I can’t see them being allowed to do half of what they could.

Anyone else read this in the Telegraph?

Read more about the Police Robots at Electric Pig