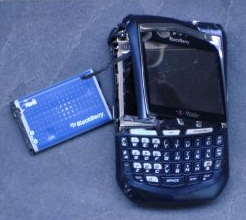 Where non-RIM handset owners may have joked that it was nice to see the BlackBerry cobbler observing 3-4 days silence in respect of Steve Jobs and Dennis Ritchie – the BlackBerry blackout was no laughing matter. After RIM’s UK MD stated that the situation was unacceptable you would expect that BB owners were in line for some compensation. You’d be correct. Well, kinda…

I would have thought that some money back in respect of your mobile being a paperweight for a week or at least vouchers for accessories would be proposed.

To rub salt into already raw and bloody sores Research in Motion is offering BlackBerry phone users a bundle of apps, including The Sims 3, Bejeweled and Shazam.

Yup – there you have it. BBM that great news to your friends!

RIM said a selection of “premium apps” worth more than $100 will be offered free of charge to subscribers as “an expression of appreciation for their patience” during the outage.

Look at what you get to select:

I bet you’re thanking Slough right now for this fortuitous event eh? Not much of an app-ology is it really?

To prove that RIM has the business users at its hearts still they get a whole month’s technical support for FREE!

The compensation package will be available “over the coming weeks” and run until the end of the year.

In some countries, including South Africa, phone networks are also offering compensation such as free minutes and texts, or money off your next bill.

That’s more than has been currently reported by UK phone networks who are yet to offer any compensation.

Do you think that BlackBerry is doing enough? How many BB owners will renew and how many will jump ship come contract time?

Let me know if you were affected and what you plan to do when your contract is ready for renewal.

Fancy seeing BlackBerry boss Mike Lazaridis grovelling in order to keep your custom? Of course you do: