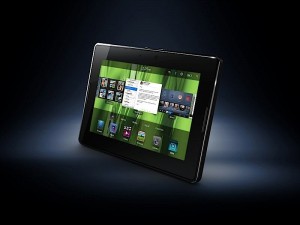 There has been plenty of chat about whether or not BlackBerry will get a tablet sibling to take on Apple’s iPad.

Well, the waiting is over as RIM announced the arrival of the PlayBook at today’s BlackBerry developer’s event!

This 7-inch, 9.7mm thick tablet outputs video at 1080p, brags e-reader functionality and has its own BlackBerry Tablet OS.

Under the hood throbs a 1GHz dual-core CPU and 1GB of RAM.

It sticks its tongue out at the iPad as it’ll run flash 10.1 with hardware acceleration as well as supporting HTML5.

It sports HDMI and USB ports as well as front (3 megapixels) and rear facing (5 Megapixels) cameras both with full HD.

For all you pin-stripe types – it’ll connect with BlackBerry enterprise servers out of the box.

RIM wants you workers to get in on gaming with the PlayBook’s OpenGL supportâ€”as well as a full browsing experince.

If you’re an app developer you can benefit from in-app payments, a BlackBerry advertising service, and Adobe Air for app creation.

I think I can hear the Galaxy Tab crying.