RIM Announces Every BlackBerry will Have NFC Payment Tech 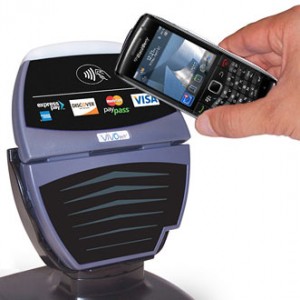 Fancy paying for stuff by swiping your phone?

Near Field Communication (NFC) has been bandied around quite a bit over the last few years but Stephen Bates, MD of RIM in the UK, has today announced that NFC tech would be in all BlackBerry smartphones!

He stated that NFC would be in â€œall of our new devices moving forwardâ€.

Ok – he’s not said when this will start and which will be the first choice of BlackBerry that will get kitted out with NFC. You have to admit that his is a definite message that RIM are serious about NFC though.

Bates reckons that we’ll soon be using NFC for payment in Starbucks, buying tickets at the O2, and swiping our smartphones instead of our Oyster cards to access London’s marvelous transport system.

â€œThe opportunities are endlessâ€¦We donâ€™t know how itâ€™s going to pan out, but weâ€™re in the process of building an an ecosystem.â€

So far that’s Android, RIM and Nokia that have joined in the NFC march – with Apple poised to make announcements tomorrow could they be dipping their toe in to the NFC pool as well?

Would you prefer cash, card or phone as a method of payment?

Let me know below!