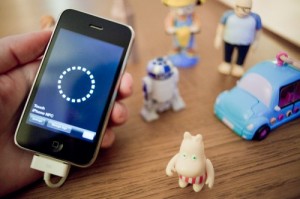 I’ve just received a link to a rather groovy vid.

RFID technology has plenty of potential but, to be honest, it’s not really appearing ‘all over the shop’ just yet.

One reason for this could be he lack of RFID readers (short of the Mir:ror by the Nazbatag makers).

This hasn’t dampened the touchpaper for the people behind the Touch research project, oh no!

They’ve hooked up a rather chunky RFID reader to an iPhone and made it perform some pretty clever tricks.

The team have managed to assign various media to different objects.

This is all in the trial stage but looks promising and the researchers behind the project can see plenty of potential for other applications, including gaming and marketing.

Have a goosey at the vid below.

Thanks to Daz for the email 🙂