Reviews of HTC One OtterBox Commuter and Defender Series cases

I love my HTC One, but the main thing that I’ve noticed since leaving the cult of Apple is the lack of cases and covers for my device. So, I’m happy to say that I’ve had the HTC One wrapped up in a couple of OtterBox cases to test them out.

For those of you unaware of OtterBox cases they cover your tech in layers of protective rubber and plastic so that your latest pride-and-joy remains unscathed as it travels with you through life.

These cases aren’t the ultra thin, will merely protect your phone from scratches, kind of deal. These are designed for the clumsy, fumblers of gadgets.

Commuter Series case for the HTC One

The first of the cases I’ll look at is the Commuter Series case for HTC One.

The Otterbox Commuter case consists of a rubber inner sleeve and a hard plastic shell on top of that, as seen in the picture above. So you’ve got shock absorption, moisture protection and all of this is partnered by a screen protector to stop your display from getting scratched.

The rubber case goes on easily enough. It’s just a case of sliding the phone inside it, and make sure the edges are properly squared away and wrapped neatly around the front of the phone. 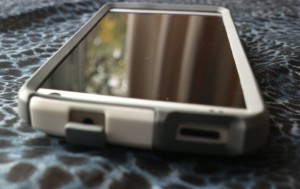 All the neccessary apertures, such as microphones and camera lens are left exposed whereas the headphone and microUSB ports are leveled by jointed cut-outs of the rubber sleeve.

The next protective layer is the hard plastic bit. Starting at the bottom, fit the HTC One and its new rubber onesie into the plastic shell. It’s pretty much a no-brainier to get things fit. 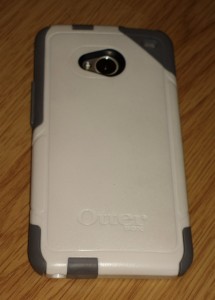 So, now you’ve got a hard-shell back with rubber sides and corners. The little rubber doors now close against the hard shell too.

Don’t go chucking your covered HTC One in to the sink to test it as the mic holes are still exposed, as they should be, as are the dual stereo speakers remember. No point in covering them up and rendering them useless.

The Commuter case does add some chunk to the extremely svelte smartphone but then this case is going to allow it a longer life. Saying that though, it’s not as bulky as I expected it to feel.

The materials feel top quality and it’s good to know that my HTC One is well protected.

OtterBox Commuter Series case for HTC One in a nutshell:

The Commuter Series case feels good in the hand as well as feeling like a quality case. As well as that 2-layer protection, it also adds some non-slip to the very smooth HTC One, but without the case turning out your pockets every time you retrieve your mobile.

This will definitely protect your smartphone from the average day-to-day hazards.

The OtterBox Commuter Series case for HTC One is available now from their website for £29.99.

The Defender Series case for HTC One

In the box you’ll get the Defender Series case, a clip-on holster for your case and a small instruction pamphlet on how to assemble your case around your phone.

The reason for the instruction manual is that the Defender Series is actually made up of 3 parts (4 if you count the holster); 2 parts make up the polycarbonate inner case that encapsulates the phone and the third is a silicon outer layer. All of that, along with the built-in screen protector, goes to being a very effective guard against the hazards of being dropped, as well as from dust and scratches.

To get started you have to disassemble the case by peeling off the silicon layer to expose the inner case.

Parting the inner case can be a tad fiddly especially, if like me, you don’t notice the clips that run along the edges of the case. Once that’s done, the front plate which includes the screen protector will separate, allowing you to place your phone inside against the padded back-plate. 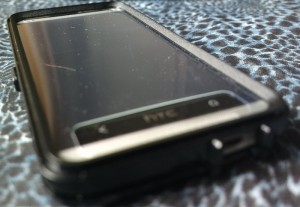 Thankfully, peeling the silicone outer back over the hard shell is as easy as just that. Once you’ve got the edges sorted and the rubber against all of the screen protector, the job’s done.

Now your phone is held snugly in the hard polycarbonate (PC) inner case and then that is, in turn, engulfed by the shock absorbing silicon outer case. This is definitely one of the most solid feeling cases I’ve ever felt.

As with the Commuter Series, the appropriate space has been left for soft buttons and mechanical buttons alike to be pressed as well as spaces for the camera and sensors at the top of the phone.

OtterBox says that the case is dust proof, however there is a gap between the in-built screen protector and the display which would allow dust ingress. If you are particularly bothered by this then an adhesive screen protector can be added. Saying that though, the built-in protector is made from much thicker film and will offer better protection from sharp edges and the like than the thin adhesive type alone.

Your audio and microUSB ports are protected from dust by heavy-duty flaps which fits snugly with the rest of the case. The camera and speaker insets are very deeply housed and are likely more than protected from almost all accidents.

The holster is the last piece of the Defender case and it is quite a nice touch for those of you who wish to take your smartphones into slightly more rugged environments. The case has been designed to fit into the holster in all possible orientations; screen facing out, or screen facing in, and the clip that holds the case in the holster is actually quite stiff and won’t release your phone and case unless you really want it out.

The holster also comes with a 360 degree rotatable clip on the back meaning you can mount and orientate your smartphone however you like on your belt, bike, saddle, etc.

It’s obvious that this bit of kit has been built with the more athletic types in mind as the the clips on the holster may prove difficult to operate if your strength is a little below par.

The holster has an added bonus too. You can lock the clip at the back in the open position and then it becomes a neat little kickstand enabling you to stand your HTC One up in landscape for handy movie watching.

OtterBox Defender Series case for HTC One in a nutshell:

The OtterBox Defender Series case is an absolute beast. It is, without a doubt, one of the most hardcore phone cases I’ve tested.

With your HTC One wrapped up in one of these you can be sure that it will be protected when you go all outward bounds with it. It will equally stand up to the rigours of being used in a workshop or out in the elements – just don’t drop it in a pond, pool or a pint 😉

You can buy an OtterBox Defender Series case for HTC One direct from their website for £39.99.