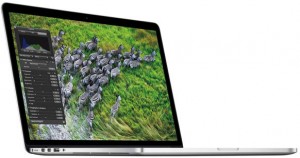 Hard to believe but the Apple event wasn’t just about the iPad Mini. As well as refreshing some of the Mac line the new 13-inch MacBook Pro was unmasked. It’s now thinner, lighter and is equipped with a new display.

Apple has managed to shave of the thickness of the MacBook Pro to almost within MacBook Air territory.

The new MacBook Pro now measures just 0.75-inches thick (1.9mm). Thankfully though, this doesn’t mean that it lacks the power you’d expect from the Pro.

Under the hood you get the latest Intel Core i5 and i7 processors, a massive 8GB of memory and up to 768GB of speedy solid state storage.

Nope – no optical drive here. As well as the SSD replacement there’s an HDMI port, SDXC card slot and Thunderbolt port should you need extra space.

As expected, the new MacBook Pro has been garnished with Apple’s Retina Display tech.

The Retina Display packs in 4.096 million pixels in to its LED backlit display which features IPS technology and a 2880×1800, 220 pixels per inch resolution.

The new MacBook Pro is on sale at the Apple online store today, and starts at £1,449. Yup, enough to make your eyes water – at least the Retina Display might soothe them.