RescueTec will save your soggy smartphone 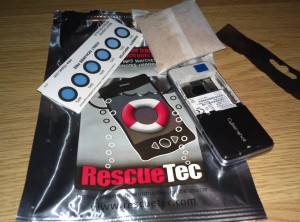 Ever dropped your phone in the bath or in your pint? Sucks doesn’t it? Most gadgets hate water (and other liquids) but getting them drenched needn’t be the end of their life thanks to RescueTec.

Anyone that has lost all their contacts, diary entries, photos and other bits because they got their tech soggy will now how much of a deal it is. Apparently more than 30% of UK smartphone users have damaged their devices by either dropping it in water or spilling a liquid over it. Even if you have insurance there will usually be an excess to pay for a replacement handset – but that still wont get everything you stored on it. Unless, you regularly back your stuff up.

I’ve been asked a number of times how to dry out a sopping phone or moist tablet and where some ‘home remedies’ might work, my experience with RescueTec is that it not only works, it’s also unlikely to damage your equipment further.

RescueTec is a new product that uses science to remove water from your device and bring it back to life.

The RescueTec pack contains a special compound which is like a magnet for water and will dry out any device placed inside. Rescuetec has undergone detailed laboratory testing and is proven to recover phones and other personal electronic devices, even after prolonged submersion in water.

Other liquids such as salt water, alcohol and detergent can also be removed with a combination of rinsing the pollutant away with clean water and then using the Rescuetec pack. The pack also includes an indicator to tell you when the device is dry and safe to restart.

For my own test I left a trusty old Sony Ericsson C510 which had lost its back ages ago in the bathroom sink for long enough for it to stop working. 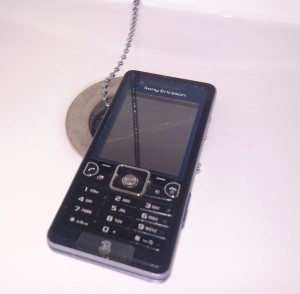 I then removed the battery, gave it a quick towel-dry and then plonked it in the bag with the indicator card and the pouch of magicness.

I had a peek later and noticed that the blue dots had turned pink. I left it 48 hours as instructed and then took the old SE C510 out of the silver bag.

I replaced the battery and pushed the button and waited…

The legend “Insert USIM..” appeared. It was like watching a friend come back to life!

Retailing at £16.99, RescueTec is available now direct from their website.