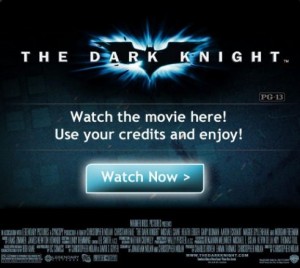 Sega has entered social gaming and now Facebook has started to dip its toe into renting movies.

Facebook has looked at its 500 million global users and thought that it can make more money by going into the film rental business than purely relying on advertisers.

To this end the blue-logoed social networking leader has teamed up with Hollywood studio Warner Bros to trial full-length film rentals from within Facebook. The latest instalment to the Batman franchise, Dark Knight, is now available for rent direct from the social network.

You may already be aware that you don’t spend pounds and pence in Facebook world – this means that the movie rental platform, which is only available to users in the US at the moment, will charge 30 Facebook Credits ($3) per rental. The film is then available to watch for the next 48 hours.

“Facebook has become a daily destination for hundreds of millions of people. Making our films available through Facebook is a natural extension of our digital distribution efforts.”

To rent the film all you need to do is visit the officialÂ Dark Knight Facebook page and there you will find an link entitled â€œrentâ€ or â€œwatchâ€ depending on where you are in the world. By clicking on this you then have to apply for Facebook credits.

Soon there could be no reason, apart to visit GadgetyNews, to leave Facebook! Saying that, GadgetyNews is also there 😉