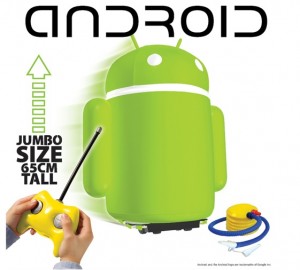 I think that the Android mascot is possibly one of the cutest robots out there. It’s certainly cuter than the original design. So, when I was asked to test a remote controlled version of it, I happily accepted.

If you have a family member or friend who loves their Android device, whether phone or tablet, then this might be the perfect gift to accompany that fandom.

The Android itself is inflatable which means it will pack away flat when not in use which is great if space is an issue.

I have to admit that it was a tad fiddly to put together as the plastic is quite stiff and the rubber hoops a snug fit but, once it’s all clicked into place, then it’s just a matter of pumping it up using the supplied pump.

Notice the way round you should put together your Android? Attach the wheels and *then* pump it up. As usual I was well too gung-ho about testing it and didn’t bother reading the instructions. That meant me having to deflate the big green Google droid and start over.

Although, the instructions weren’t perfect. They said that the large nozzle for the pump was for inflating the body, with the small nozzle used for pumping up the arms. The arms inflate along with the body and head on the one I have. 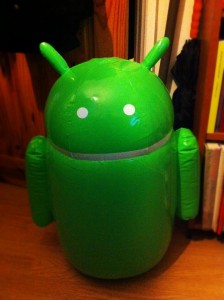 It’s easy to move around the place and the chunky controls will help you guide your new air-filled Android about the place. It moves backwards and forwards as well as round to the left and right.

Before too long you’ll have the little droid whizzing up and down and spinning on the spot.

On the softer side of remote control toys, this inflatable remote control version of the Google Android makes a great gift for kids and smartphone-addicted adults alike. The RC handset is child-friendly and makes this RC robot easy to control, with the ability to move forward, backward, left and right. Plus, if you knock the remote control Android down, his self-righting system will get him straight back up again!

Apparently there’s only 500 available in the UK, so get yours before they go.

You can get your very own Remote Controlled Inflatable Google Android ‘Pump and Play from the  Gadget Website – Gadget Inspector.