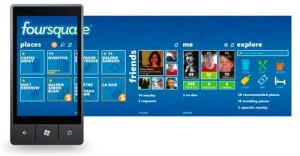 They tried it before and, well, it didn’t go well did it? The original Foursquare app for Windows Phone 7 had a number of issues but now there’s a new and improved version!

When Foursquare first landed for Microsoft’s mobile OS it was lacking features and actually using the app was less than fun.

Users were finding that their hard work, zipping about the towns and cities of the world, weren’t be rewarded as justified.

You will be pleased to know that a new version of the mobile check-in application has been released so it’s time to show how much of a gad-about you are again.

The Foursquare reboot has an all new interface that takes full advantage of Microsoft’s panoramic UI and as Foursquare has worked closely with the Big M the app features neat things such as a live tile, tap-and-hold check-in, and a map that shows friends’ check-ins alongside nearby specials.

Version 2.0, as it’s being called, is now available in the Windows Phone Marketplace so go give it a whirl and let me know what you think of Foursquare for WinPho7 Version 2.0 – Oooo and why not add me to your friends list? The link is at the top of the home page 🙂