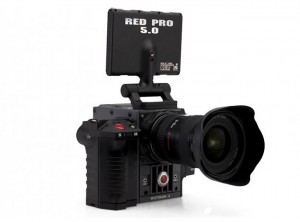 If you have been lusting over RED’s EPIC and ONE cameras but thought they were too bulky or pricy then you might wabt to check out SCARLET.

The RED SCARLET is a very impressive camera indeed.

The new SCARLET camera takes the compact position in RED’s already famous range of cams – which aint bad to say they only appeared 3 years ago.

I’ll let that sink in whilst pointing out that all that is acheived at compression rates way superior to what’s been used to shoot movies. If you’re more into your stills then get ready for this – The full sensor size is 5120 × 2700 for your snaps!

The SCARLET is equipped with a Super 35-sized sensor and ‘leftover chips’ from the EPICs brains; A camera which costs almost three times as much as the SCARLET. In fact, if you shoot the same type of footage with the same lenses using the SCARLET and the EPIC I dare anyone to spot the difference – and, if you can, is it worth 3x the price?

The new RED SCARLET is available with Canon EF and PL mounts with the PL version costing a tad more than the EF.

You can definitely tell it’s a RED camera as it follows the company’s aesthetics basically being a chunky brain onto which you can attach a whole host of RED’s accessories. The main difference is the size and the fact that it comes in “battleship grey,” as RED founder Jim Jannard describes it, and it doesn’t have “ribs,” because “she’s a girl, she’s smooth.”

Those accessories and modules allow you to configure your camera to adapt and fit every shoot.