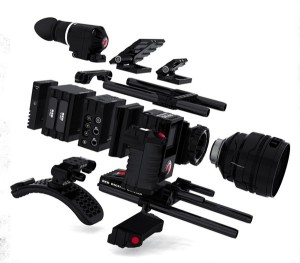 After quite a lot of teasers, rumours and a smattering of hype RED just this momentÂ went official with their eagerly anticipated DSMC (Digital Stills and Motion Camera) System.

There’s many, many combinations to this thing, be warned.

Let’sÂ start with your choice of the professional Scarlet or “master professional” EPIC brains which can then be configured into about “2,251,799,813,685,248 possible camera configurations” -Â so says RED in a half-jokey manner ;)Â

These ‘brains’ are built upon Mysterium-X and Mysterium Monstro sensors which start at 2/3-inch and end at a whopping 6×17-cm!Â  Good news is that when a new sensor comes out all you do isÂ just upgrade the brain.

The first Scarlet systems could come as early as Spring of 2009 while EPIC should arrive by summer. Of course, the brain is just the beginning of the costs.

Just to confuse me even more RED has also introduced a 3D camera today.