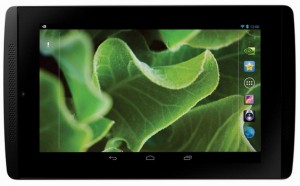 If you are looking for a keenly priced Android tablet, let’s say under £200 but want it to be a 7-incher packing a Tegra 4 processor. Then you are very much in luck, my gadgety friends.

It appears that Advent, the Dixons-owned gadget brand, has slapped its name all over NVIDIA’s Tegra Note reference design tablet ready for those Christmas lists to Santa.

Under the hood there’s also a 72-core GeForce graphics chip and quad-core Cortex-A15 processor with a fifth battery-saver core. It is claimed to be the fastest Android tablet on the block.

As well as offering full stock Android, the Tegra Note 7 has been designed to offer the best gaming experience on the market.

Nvidia PureAudio is on board to offer a wide frequency range for sound, with front-facing stereo speakers and a bass reflex port include.

Flip the Vega Tegra Note over and you’ll find a 5-megapixel primary camera to buddy up with the 2-megapixel webcam up front.

As with the original, the slate comes with a stylus, which NVIDIA promises will be incredibly responsive thanks to its DirectStylus know-how.

The battery is quoted as being good for over 10 hours for HD video playback.

Pre-orders begin tomorrow, and the hardware will start hitting doorstops on November 15th for the rather reasonable sum of £179.99.