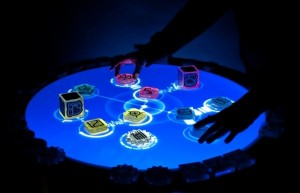 The Reactable built byÂ researchers at Pompeu Fabra University has been doing the rounds at various trade showsÂ and it looks like those same people are actually forming a company (Reactable Systems) and putting the device into production.

The table is similar to the Microsoft Surface but Reactable are focusing primarily on the device’s potential as a musical instrument.

The table makes use of a series of “pucks” that each control a different aspect of the system, and are able to interact with each other when they’re in close proximity.

There’s, of course, no news about price or release but check out the video below and try not toÂ want to have a go!