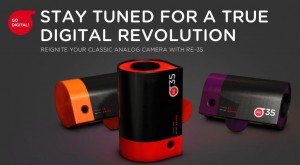 I’m not saying that this wouldn’t be a genius idea if it actually existed but even I was a bit dubious at the specs.

The wheeze centres around a cartridge that you are able to slip into your film-gobbling camera which transforms your analogue snapper in to a DSLR!

It appears that there’s been plenty of elated camera sites lauding the RE-35 SLR upgrade as the real gift from lens-monkey heaven. Even Gizmodo has been conned!

Granted the site is impressive and appears quite sober but I’m not sure how this click-in DIY solution would actually work and, apparently, the little cartridge packs USB, flash memory amongst other tasty bits.

Perhaps they should check out Rogge Und Pott’s blog 😉