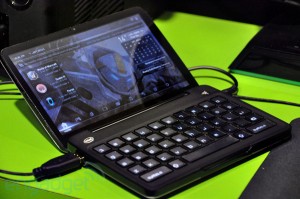 If, like me, your gaming laptop isn’t exactly what you’d call light then get a load of this!

The Razer Switchblade has me salivating and, quite frankly, ignoring the fact that I’ve ever seen Panasonic’s Jungle.

That may sound a little harsh but Razer have been connected with gaming for a while now and Engadget have managed to have a poke and prod at the ever-so portable gaming PC at CES 2011.

They go into a lot of detail but the skinny is this.

The mini notebook sized machine was running a full-fat version of Windows 7 with an optional Razer overlay that makes access to the internet, media, games even easier. It’s equipped with a 7-inch capacitive touchscreen with a 1024 x 600 resolution.

The eagle-eyed will have noticed that it also has a keyboard. It has enough keys to fit the standard QWERTY layout but the magic happens when games such as World of Warcraft is launched. Â You see,Â Â each button is actually clear with an LCD screen underneath it. The image on each key changes dynamically depending on what game you’re playing, In WoW, users can actually disable the row of on-screen icons to save screen space, particularly since all of those squares are lit up below. Thereâ€™s a â€˜Functionâ€™ key that flips over to page two when it comes to icons, and on the standard keyboard, a â€˜Symbolâ€™ button converts your numbers toâ€¦ well, symbols.

Chances are that this will mostly rely on keyboard profiles for major games but I reckon everyone will be hoping that all the keys will be customisable.

There’s mini-HDMI output and an AC input along the right edge, while a full-size USB 2.0 port graces the left edge. Since there’s a bona fide copy of Win7 underneath, you can hook up any USB peripheral you’d like: a keyboard, mouse, webcam, whatever. There’s also a front-facing webcam along the top edge of the LCD, and it’ll ship with Bluetooth and WiFi inside. It sounds like there may be a 3G and non-3G version when it appears.