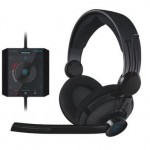 I have a deep respect for Razer and am a big fan of theirÂ gaming mice and they’ve unveiled a new model at The Games Convention in LeipzigÂ (home of my favourite goth festival) yesterday.Â  But it aint a mouse!Â

Named the Razer Maelstrom Audio Engine, the company has turned away from the input peripheral and this time created a 7.1 surround sound gaming headset.Â

The Razer Megalodon, say the makers, is powered by the Razer Maelstrom Audio Engine, which has the ability to process audio algorithms up to 800% faster than traditional HRTF virtual surround sound technologies for gamers who need that kind of detail.

According to the Razer, “gamers looking for an in-game advantage will be able to listen to the positional cues emitted by the Razer Megalodon and hear incoming threats before the threat can actually be seen onscreen”.

The desk-based control pod is connected to the headset via a braided cable and comes in a glossy piano black finish with a rotating dial adjustment for volume, mic, bass and positional sound. The pod allows gamers to switch between 2.0 stereo and 7.1 surround sound, even controlling which speakers gamers prefer to use in the 7.1 environment.

The new headset will cost around 139.99 euros when it launches later this month.