Razer gaming tablet waiting for you to say yes [video] 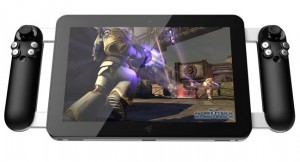 Gaming hardware supremos, Razer, revealed their Project Fiona tablet earlier in the year at CES and now they want to know if you like it – if enough of you do, it will go in to production.

After unveiling their gaming tablet concept, codenamed Project Fiona, at CES at the beginning of this year Razer has been keeping quiet about its development and plans for production – until now.

Due to all the interest generated by Project Fiona Razer has now published a Facebook page for their tablet gamer. They also promise that if they receive enough interest, and the page gets 10,000 likes/shares within the next 7 days, the gaming tablet will go into production.

Razer’s Project Fiona is a 10.1-inch touchscreen gaming tablet sporting a 1280 x 800 resolution and packs dual joystick controls, one on either side of the tablet.

Razer states on their Facebook page: “If this post gets 10,000 likes/shares in the next 7 days, we’ll work on making the concept a reality and launch the product. On top of that, we’ll share some of the high-level concepts with you to crowd source some of the design decisions – For Gamers. By Gamers. We’d like to hear how you would like to design the actual tablet right here on the Razer Facebook Page, as well as take suggestions for specs, form factor, pricing, features etc.”

Check it out in the video below:


If you ‘Like’ what you see, nip over to their page and let them know. While you’re Liking please feel free to do the same here 😉