It looks like, as well as modular phones (Eco-Mobius, Ara, Phonebloks) and backpacks that we might see modular computers. Project Christine, as it has been dubbed by Razer, is a fully-fledged gaming system. However, unlike current high-end gaming PCs, it has a design that makes it easy to swap out components.

The Christine concept PC has been unveiled at CES and even though Razer has never made a desktop PC before, and only recently made PCs at all with the Razer Blade and Razer Edge being their first products, the design for Project Christine tops them all.

Razer’s design for Christine is incredibly cool and the idea pretty straightforward but ingeniously executed. It has a central rack which holds plug-in parts that sprout from the sides, building a Jenga-like tower of power.

The idea behind the PC is to mix high-end, enterprise-class PC architectures with the flexibility of a modular design.

Instead of having to open the case and connect bits directly to the motherboard, each component is encased in a module. That module in turn connects to a PCI Express backbone – which means you can add and upgrade easily when your finances allow.

Users can create their own combination of processors, quad-SLI graphics, SSD or RAID storage, power supply and so on depending on their needs and/or budget.

“Project Christine is a new concept design that will revolutionise the way users view the traditional PC,” Razer founder, chief executive and creative director, Min-Liang Tan said in a statement. “This is the first gaming system that is able to keep pace with technology and could allow consumers to never buy another PC or gaming system again.” Adding, “We have a history of bringing incredibly innovative concept systems to market and it’s fair to say that Project Christine is a very exciting new prospect for future development.” 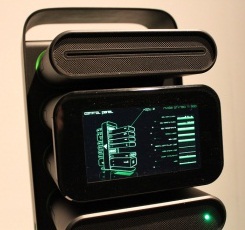 Each of the modules will be self contained and sealed so as to avoid voiding the warranty on each component.

Pushing things even further is the fact that it’s all cooled with mineral oil. A module in the bottom holds the cooling oil, while dual pressure valve systems in each module carry the oil through.

The concept system comes with a touch-screen LED display that will allow users to control which module is on, as well as provide maintenance information.

Razer has not yet said whether the PC will make it to market but I am sure that, if priced right, there would be a queue of people ready for such a machine.