Just how many times have we heard the boast “World’s thinnest”? Well, strap yourself in for another. This latest bit of bragging comes from game tech pedlars, Razer and an admittedly skinny gaming laptop called Blade.

The Razer Blade (it wasn’t going to be long til they used that really, was it?) has been tagged with the label of “The World’s Thinnest Gaming Notebook” and it looks like they could well be right.

The Blade measures in at a mere 0.66-inch thin – making it thinner than your regular smartphone for most of the case – but still manages to cram in a 14-inch HD+ display, a quad-core Intel Core i7 processor, matched with a NVIDIA GTX 765M as the graphics card of choice.

Joining the 4th generation Intel Core i7 processor and the most recent NVIDIA GeForce GTX 765M GPU the Razer Blade takes advantage of today’s modern solid-state storage tech, so you can get your game on up to four-times faster than your mate’s traditional 5400-RPM notebook hard drive.

This is a gaming machine so there’s no point in having a swanky GPU and a naff screen so Razer have hooked you up with a 14-inch LED-backlit HD+ display, a custom-designed trackpad and backlit gaming grade keyboard which are all shoved in to a rigid all-aluminium chassis. 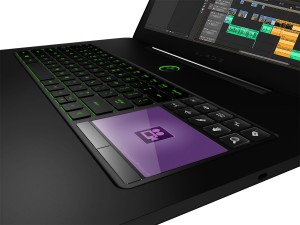 The Razer Blade Pro uses the same processor and graphics card as its smaller brother, coupled with a slightly bigger battery for your larger-screened portable gaming experience. That does add some girth, obviously.

Pricing for the Razer Blade starts from $1,799 onwards as it is made available for pre-order from June 3 in the US and Canada.