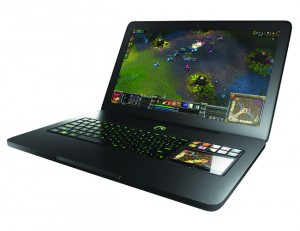 I’ve owned what was classed as a gaming laptop and, apart from its weight, it was a great bit of kit. However, Razer CEO Min-Liang Tan explains that the “world’s first true gaming laptop” is soon on its way and it’s called the Razer Blade – too many cutty words?

The Razer Blade looks every inch the gaming laptop and those serious about portable gaming should get their lists to Santa re-written as it looks like the Blade is almost ready for pre-order with deliveries being ready in time for Christmas according to Min-Liang Tan.

The only Blade laptop that I’ve covered before was from LG – this Razer Blade is worlds apart from that slim laptop which was aimed at the MacBook Air market.

The Razer Blade has been developed with NVIDIA and Intel and features a Intel Core i7 processor, a “high performance” NVIDIA GeForce graphics processor and an LED-backlit 17-inch screen.

Although the Blade name sounds deadly and, dare I say it, macho the reasoning behind the “worlds first true gaming laptop” (not sure what Alienware has to say about that boast) apparently comes from Min-Liang Tan’s time in the military.

“When I served in the army, I was sent for survival training in the dense jungles of the tropics. We carried only the most essential gear and one key item in my kit was my KA-BAR combat knife” says Tan “It was simple, minimalist and utilitarian – and we used it for everything from hunting, to preparing food, cutting rope and building floats. Every night after setting up camp, I would spend my time sharpening it during watch. It was one of the finest knives I’ve ever used – clean, cold. supremely balanced and lethally sharp.”

The Blade may not be minimalist but it does look very capable. The Razer Blade is equipped with the “Switchblade” user interface which allows you to put hotkeys, macros and skills on 10 adaptive tactile keys with matching icons but the icing has to be the LCD multi-touch panel.

This highly sensitive 4-inch touchscreen next to the keyboard displays in-game info such as quests and chat messages but it can also be used as a multi-touch track pad. You could even play YouTube game tutorials on the small screen whilst putting your new knowledge to action in-game.

The latest update to hit the Razer Blade is that they’ve decided to ditch the 320GB HDD for a much faster and cooler 256GB SSD drive.

All of this tech weighs in at less than 7 pounds and is .88-inches thick.

Shipping has already started to selected gaming CEO’s and pre-orders are expected to start for regular folks in a few days time – I’d put away somewhere between £2,500 and £3k if you want one I reckon.