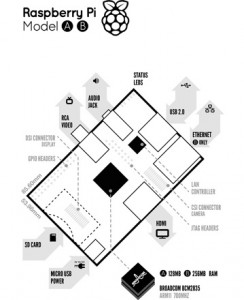 That ‘ping!’ you’ve just heard is the signal that the Rapsberry Pi is ready to serve. The £20 credit card-sized PC has had a few problems in the mix since its announcement in February, but now it is being dished out.

After a couple of issues I am pleased to say that the first portions of Raspberry Pi are heading out to West Yorkshire and a group of schoolchildren in Leeds, according to the Raspberry Pi website.

On the website you can see a picture of the devices being loaded into a car to be shipped.

Apparently, if you were at the head of the queu, you should receive your Pi by April 20th, so says the manufacturer.

The reasons for the dealys were that, originally, the wrong component was baked onto the circuit boards and then the device had to undergo EMC testing last week to be allowed to be sold in the UK.

Needless to say, it was a cakewalk for the Pi.

All of those Rasbperry Pis were heading to the distributors on Friday and customers who have already placed orders should receive theirs within seven days.

The Raspberry Pi is targetted at tinkerers and, especially, at school kids in order to get people interested in programming again.

The barebones circuitboard is still capable of outputting Blu-ray quality video to your TV via HDMI but will easily sit in the palm of your hand. If you sling it in a case, such as the one from ModMyPi, then it’s perfect for slinging in a bag and taking on your travesl – as long as theirs a TV or monitor at the other end 😉

You also get a pair of USB 2.0 ports, 256MB RAM, and an Ethernet port. The processor is 700MHz so it’s not going to challenge your day-to-day puter but it’s enough to use to get people in to programming – all for 22 notes!