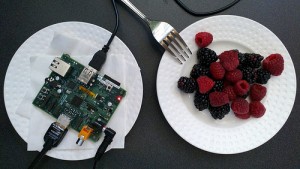 More little Linux computer news – The Raspberry Pi is a £20 computer which is capable of outputting Blu-ray quality video to your TV but small enough to fit in the palm of your hand and is available NOW!

Ok, just because it’s on sale now that doesn’t mean it’s easy to get a piece of Raspberry Pi.

Raspberry Pi and the component manufacturer that’s selling the unit, RS Component, are both the top trending topics on Twitter right now. This is great news for the device and all involved, not such good news for their websites which have been royally spanked.

If you want to grab one, head to RS Components, search for Raspberry Pi and register your interest now for when the sale opens properly later today.

Distributor,Premier Farnell, has today announced a global distribution deal with the Raspberry Pi Foundation to offer its ground-breaking credit card sized computer.  The element14 Community will support the conversations, debate and sharing of knowledge and information from the anticipated flood of enthusiastic developers and first-time programmers keen to get the most  from their Raspberry Pi.

Harriet Green, CEO of Premier Farnell, the company behind element14, said: “This partnership brings together the world’s biggest online design engineer community with one of the most exciting electronic/embedded computing products to be launched for decades.  We believe it will provide the catalyst for a programming revolution. The opportunity to engage a new generation of engineers and computer experts is very much in our sweet spot as a company. Through our element14 Community we will encourage everyone from developers, modders, coders and programmers to discuss, share and develop their ideas and fully utilise the game-changing potential of the Raspberry Pi computer.”

It runs on a 700MHz processor and will play nice with tasks like word processing and has enough juice to output Full HD video to your TV via the HDMI port.

The Pi, which isn’t much bigger than a credit card and doesn’t come in a slinky case like FXI’s Cotton Candy, is designed as a charitable pursuit by the Raspberry Pi foundation. It hopes the low price and ability to develop both the Linux software and the hardware will see the Pi become an educational tool to get kids interested in computer science again.

Pi founder Eben Upton noticed a severe lack of young people applying to study computing in university and concluded that part of the reason is that computers and games consoles today are often extremely expensive, and are locked down to prevent people from tinkering.

Eben Upton, co-founder of the Raspberry Pi Foundation, commented: “The decline in core computing skills is something we really want to address with Raspberry Pi and the way the element14 Community supports developers of all skill levels makes it a really strong partner in tackling this issue. Overcoming the students’ fear of programming for the first time is a critical step in unlocking the full potential of the smartest people in any industry. I have no doubt that having the support of a community of like-minded developers will be a catalyst for success.”

With such a low price, schools could afford to buy numerous Pis and let kids go wild with their soldering irons.

See the unboxing of a Raspberry Pi below: