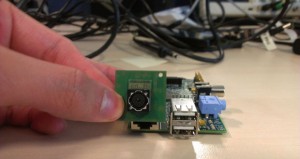 Great news for those wanting a bit more to play with on their Raspberry Pi super mini computer. The makers now have a 14 megapixel camera add-on on its way!

The Raspberry Pi is made to mess with and soon you’ll be able to add a compact 14MP snapper to your credit card-sized machine.

The camera attaches via a ribbon cable and will be just the ting for home automation applications or even robotics.

It’s due for release later in the year but there’s no mention of  specs or price.

The developers are active on the forums so I’m sure they’ll tell you what to know if you ask nicely.

They’re obviously conscious of the original remit of the Raspberry Pi as they have already stated: “We may downgrade the super-duperness of the camera to something with fewer than its current 14 megapixels before release. We need to keep things affordable, and a sensor of that size will end up pricey,”.

It would be a bit silly asking a lot of cash for a camera attachment when the Pi costs £22.

The Raspberry Pi is now, finally, cleared for UK delivery.

When the Pi originally went on sale it sold out in 2 hours and broke the interwebs!

Check out the ModMyPi if you’re looking to wrap it up in a case.