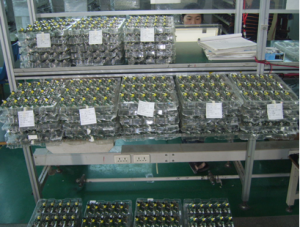 The Raspberry Pi foundation issued a statement today with a status update on their much-anticipated £20 Linux computer. The good news is that the first 2,000 completed units have arrived in the UK! The bad news is that there’s another hurdle before buyers can get to them – they need the CE stamp of approval.

The long awaiting arrival of those bare-bones boards here in the UK is a step closer and the Pi devices are actually on these shores after going on sale at the end of February. There’s just the small matter that foundation’s retail partners won’t distribute them to purchasers until they have been stamped with the CE marking.

Most of you will have seen the CE marking on a variety of consumer electronics products. That is a stamp of approval certifies that the product conforms with the regulatory standards of the European Economic Area. In order to apply the CE marking to a product, it has to undergo a conformity assessment and the manufacturer has to produce certain documents.

The Raspberry Pi foundation wasn’t aware that it needed the CE marking in order to distribute its computer in Europe because the Raspberry Pi computer is a bare board and not a finished end product.

The foundation still believes that the CE mark isn’t strictly necessary but are still pursuing the necessary compliance assessment in order to address the concerns of their retail partners. These folks are officially lovely!

The Raspberry blog was updated with:

“The good news is that our first 2,000 boards arrived in the UK on Monday and that we are working to get them CE marked as soon as is humanly possible, in parallel with bringing the remainder of our initial batch into the country,” Going on to say: “We’re also talking to the Department for Business, Innovation and Skills (BIS), to better understand the terms under which devices like Beagleboard are permitted to ship to domestic end users in the UK, and to obtain a definitive statement as to whether we can distribute on the same terms.”

This means that the exact delivery dates can’t be nailed down until either the testing is complete or the BIS steps in and supplies a statement that satisfies the foundation’s retail partners.

You can make the Raspberry Pi computer look like a ‘finished product’ though. The Raspberry Topping case for instance will enclose the small Linux board which packs 700MHz ARM11 CPU and 256MB of RAM.