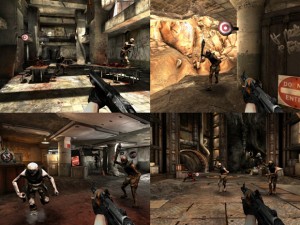 iPhone owners are starting to see what their handset is capable of – now, with the release of Rage, you almost get a console game on your blower!

iD Software, the name behind Doom and Quake, has just dropped their latest offering into the Apple App Store and the price is a pocket friendly 59p for the version built for older iOS devices, and Â£1.19 for Rage HD, which is built to run on the more powerful iPhone 4 and iPad.

The story is that you’re taking part in a game show called Mutant Bash TV (as you do) – in MBTV you earn cash for blasting as many mutants as possible.

It’s an on-rails shooter so your character moves through the game with you controlling the field of view, pointing and, most enjoyably, taking out muties with an impressive arsenal of weapons.

Tilting controls the camera and your aim, while you have buttons to shoot, dodge, switch your weapon and reload.

Leave plenty of space on your iDevice though! Rage takes up 536MB of space, while the lardy Rage HD needs 743MB worth of your memory couch!