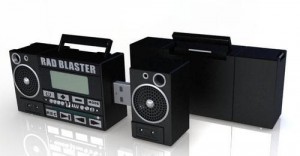 Looking for a present that’s urban, street and retro cool?

Check out The Rad Blaster 🙂

So – it does exactly like most other MP3 players do. It plays those choice cuts, record sounds and store files.

The difference with the Rad Blaster is it does all that and it’s shaped like a ghetto blaster or boombox if you will.

The Rad Blaster is also packing a 1.1 inch OLED screen and 2GB of built-in memory.

OK, so it’s larger than a shuffle but I think it looks a hell of a lot cooler.

Check out the video for some breakdancin to the RB’s beats – or head to the Rad Blaster site and pick one up for $60!