Psssst! Go to Currys or PC World to Buy Your Apple iPad on Friday 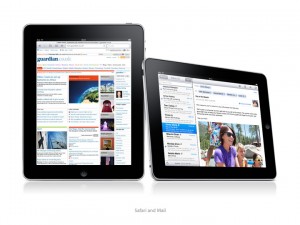 Not fancying the queues outside the Apple stores on Friday for your shiny new iPad?

How about sneaking off to one of the 139 Currys and PC World stores across the UK?

Yup – according to a memo sent to sales staff at DSGi, the stores owners, there’s confirmation that the high street shops shall be stocking the tablet on its launch day.

’til now nobody was certain that anywhere other than the UK Apple stores would be offering the iPad at its launch in good ol’ Blighty.

Word is that DSGi has a 60-day exclusive window to sell the iPad at PC World and Currys – if you’re near Thurrock, there’s whispers that your new Best Buy store may also stock the iPad.

So – Apple Store, Currys, PC World or the wild-card Best Buy? Where are you going to be on Friday or have you pre-ordered?