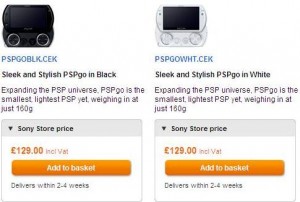 As you no doubt recall – late last month Sony announced that it was slashing the price of the PSP Go in the US and Japan with prices falling soon after in the UK.

If you bounce over to the UK Sony Store now you can score the game downloading pocketable for a mere Â£129.99 in either black or white.

That’s a whopping Â£100 shaved off the price within the last month alone!

So – sales not going as well as expected I guess.

To be honest, I’ve not heard that many wows over the handheld gaming device since it landed in October last year.

Perhaps this price drop has also something to do with a PSP 2 or even the PSP Phone? Let’s face it, the PSP Phone looks pretty much like the Go with additional phone smarts anyhow 😉