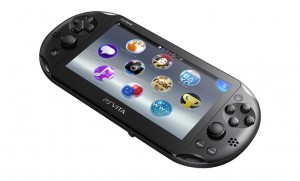 News that will surely get our own Lizard and Punk weak at the knees – Sony has confirmed that it will be launching the PS Vita Slim in the UK on 7 February and pre-orders are being taken now.

The PS Vita Slim was launched in Japan at the end of last year and boasts the fact that it’s 15% lighter and 20% slimmer than the last model. As well as that, the display has been swapped from OLED to an IPS LCD panel.

Sony claims that the Slim’s battery will give up to six hours of playtime before needing a recharge, much more than the current model. There is also 1GB of storage on board so physical games can be played without needing an additional Memory Card, unlike the original.

The model released in the UK will be the Wi-Fi-only version and in all other respects it is the same inside as the current PS Vita.

Front and rear cameras and built-in stereo speakers are on board, as well as a microphone for video calling. It is capable of being used to remotely play PS4 games, which is a great new feature for owners of both consoles.