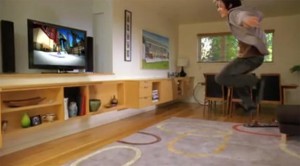 Live in UK or Japan?

Well, unless you’re rich, there’s no point in buying Microsoft’s Project Natal as word is that you’re going to need 13 feet (four metres) of space in your living room to maximise its gaming potential!

Yup, the much hyped Xbox 360 add-on is going to require a room as long as an average family car – which happens to be more room than most of us have to live in let alone play in.

Craig Mundie, Microsoftâ€™s chief research and strategy officer announced: “To be precise, you’ll want to clear an area extending at least 4 meters (a little more than 13 feet) away from the television. That’s the back edge of the space to be taken into account by the Natal sensors.â€

So – who’s got room to play Natal then?