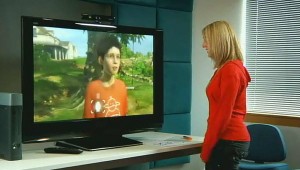 First things first – I looooove the idea of gesture controls for my media player!

Project Natal is a bar that sits above or below your TV, much like the Wii‘s sensor bar.

But instead of sensing controllers, this thing has a camera, sensors and a microphone inside that lets it get an accurate sense of where you are in your space.

This lets you control games just by moving around; kicking, jumping, whatever. But that’s really just the start.

When you have it running, your Xbox will recognise your face and sign you in automatically.

This is where it starts to fall down a little for me.

Having facial recognition is cool, but who leaves their Xbox on all the time? Let’s face it, the 360 isn’t as silent as a Ninja in Hush Puppies is it?

It wheezes its way through games but usually the sound of killing, driving or searching covers that.  But as a set-top media controlling box?

It is also cool that you can move through menus by swiping your hands back and forth.

I’m still 80% in favour and still love the idea of swishing through menus and thinks that the Wii should be a little frightened.

Project Natal dev kits are just hitting the offices of developers this week, so don’t expect to actually be using this until sometime well into next year.