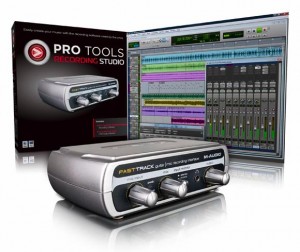 Avid may not be a company name that you’re familiar with.

But, if you hang around with musicians, sound recording artists or you are indeed a muso then you’ll know their industry standard ‘Pro Tools‘ music software.

Pro Tools Vocal Studio is the one that includes the Producer USB microphone for you vocalists out there or those that strum, blow or hit acoustic instruments. Using the software, users can remix vocals to produce soundtracks and podcasts. It also comes with a desktop stand and carrying case.

Pro Tools Recording Studio lets users craft songs and remixes with little to no prior experience. With the included Fast Track USB audio interface plugged into the computer, you can capture digital sound. The software then lets you dub, mix, remix, edit, blend, restore, and hone to create professional-sounding audio projects.

With Pro Tools KeyStudio, users can record a single keyboard track or create a complete orchestral recording using the KeyStudio to input any of the 60-plus virtual instruments that come with Pro Tools M-Powered Essential. The keyboard also works with other programs, such as GarageBand and the likes.

Each bundle ships with the Pro Tools M-Powered Essential software, which contains the following:

The idea is to make music production and home studios considerably more affordable, and given that each of these packages run to 80 quid it sounds a pretty sweet deal to me.

All this should be available pretty soon – like, days man!