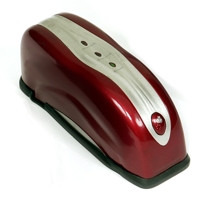 The PrintBrush will print out in A4, black and white, at up to 600dpi resolution.

It works by you sweeping the device across the printing surface (generally paper) by hand.

The manual labour of printing does have a plus side though. It means that you’ll be able to print directly onto books, cards, boxes, furniture and everything else that will take print yet is usually seen as being unable to be shoved through a regular printer.

The other plus point is that the PrintBrush is to be sillent….shhhhh…….so sweeping out a few A4’s during your bosses boring speech can be done ninja style.

The lightweight (250g) PrintBrush connects directly to computers and other devices via Wi-Fi, Bluetooth or infrared.

Word is that it’ll cost in the region of Â£120 and PrintDreams reckon the PrintBrush will be available by the end of this year.

Check out the vid of the tiny British printer at work: