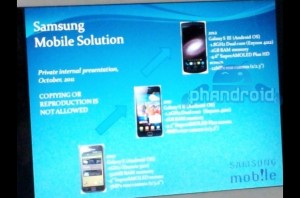 Whether you agree with the Samsung Galaxy S II being worthy of being T3’s Best Phone of the Year award or not – there’s no denying that it’s a great phone – but now details have emerged about its heir, the imaginatively named Galaxy S3.

The Samsung Galaxy S III specifications have been slipped to Phandroid and it appears that the snap comes from an internal presentation that should not be copied or reproduced – Oooops! 😛

The new shaped Galaxy S3 is said to be thinner and has a more rounded silhouette when compared to its older sibling, the S II, but it’s what its packing that’s more interesting.

The S IIIs screen looks to be a huge 4.6-inch number and there’s a 1.8GHz processor in the engine-room buddied with 2GB of RAM.

Shutter bugs will no doubt enjoy the promise of a 12-megapixel camera.

The five tray icons on the S3s screen points that the phone will be running Ice Cream Sandwich, the new version of Android that was supposed to launch today. As you’re probably aware the Samsung/Google show has been postponed as a mark of respect for the late Steve Jobs.